My first encounter with the name Canterbury was during my teen age, when I read Geoffrey Chaucer’s “Canterbury Tales”. I saw the town from Chaucer’s eyes. During my stay in London, I went for a day trip to the historical town Canterbury with my friend Subhadeep. Obviously I did not expect the town would remain similar as described in the 14th century book, but it was a wonderful experience.

Canterbury Cathedral, St. Augustine Abbey and Sr. Martin’s Church are the main attractions of Canterbury. Together, they are inscribed in UNESCO World Heritage Sites. But apart from all the monuments, Canterbury is a fairy tale town.

Located in the county Kent, the historical castle town is easily accessible from London by train or road. In both cases it should not take more than an hour and a quarter.

We went to Canterbury in the last week of May 2020 right after the lock down imposed due to Covid-19 pandemic was partially withdrawn. As planned first we reached St. Pancras International Station in London. We boarded the Southeastern line train towards Margate. Within 55 minutes we reached Canterbury West.

There are other rail services from Victoria to Canterbury East but as we lived near St. Pancras we availed the other option.

It was a sunny day with cotton like cloud chunks in the sky. We started walking at brisk pace and within a few minutes we reached the West Gate of the ancient town.

Usually it takes 5 to 6 hours to complete all the monuments and experiencing the beautiful landscape of Canterbury. I am providing the map that we followed.

West Gate is the last survivor of Canterbury’s seven medieval gates. Built of kentish ragstone in the later part of the 14th century, the gate has two drum towers. Road still passes between them.  The 60 feet tall city gate is the only living city gate in England. There is a moat that flows along the city wall and also a lovely park is there.

The West Gate Park was so colorful we decided to go there. Since it was early summer, the flowers were blooming and the newly growing fresh leaves were so green that it refreshed the soul.Pastel houses on the background of the colorful trees made Canterbury a storybook town.

We found some picnickers in the park and we also decided to have our lunch. Though it was early, we found the park safe for lunch during Covid-19 times. It was probably the best decision taken by us.

After Lunch we crossed the gate and went inside the ancient town. We started walking along St. Peter’s street.

We continued our walk along High Street and stopped on the bridge on the canal Great Stour.

On the left side of the bridge, the boat service – Canterbury Historic River Tours is located. Due to lock down the service was not running. But I found a lovely reflection of the building on the untied canal. If it could surely be impossible if the service would run. Also I found a smiling wild flower from the weed sprouted up on the concrete bridge. For the regular tourist season, the weeds would have been axed.

Witnessing the above revolution of nature, we kept continuing our walk along the High Street. On the next left turn, we found a beautiful statue of St. Peter. 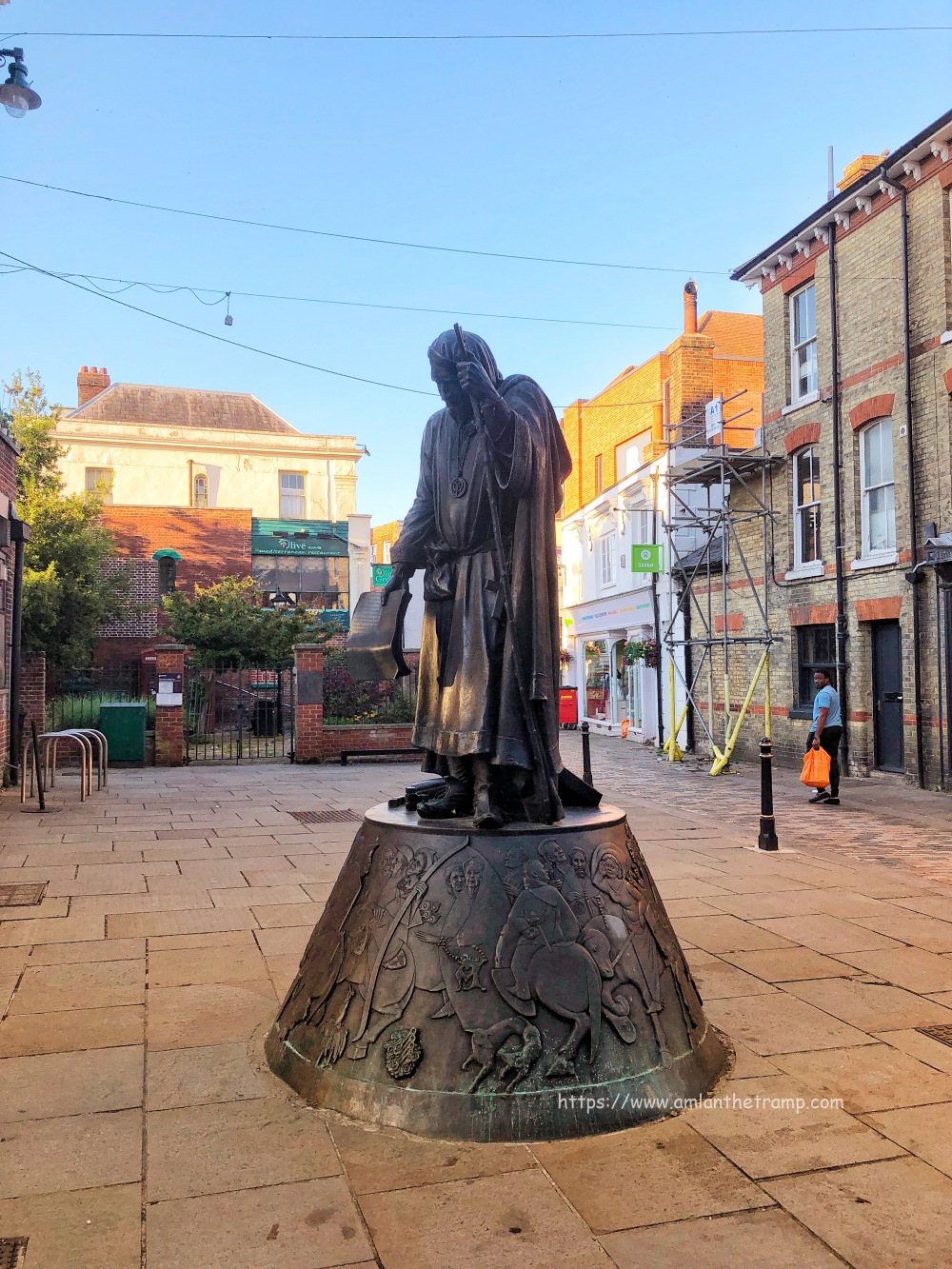 We took the next left turn to Mercery Lane– the most famous street of Canterbury. The houses of this street were of greater antiquity than any others in the city; they were built with stories projecting over one another, so as almost to meet at the top. In later years they had undergone considerable alterations, and the shops are handsomely decorated and newly fronted but the aesthetics really impressed me a lot.

The old Chequers inn, noted by Chaucer in “Canterbury Tales” as the resort of the pilgrims visiting the shrine of Becket, had been converted into shops and dwelling-houses; and the remains of the house of Sir Thomas More are now used as a store-house for wool.

Mercery Lane took me to the era of the 14th Century but suddenly I found the first glimpse of the Canterbury Cathedral.

Mercery Lane finally ended in a T-junction with Burgate where the entrance of the cathedral is located.

The trip was going like a fairy tale but a huge disappointment was waiting for me. The Canterbury Cathedral was under maintenance.

Still I managed to get some photographs from different angles.

Founded in 597 AD, the gigantic cathedral was completely rebuilt between 1070 and 1077. The east end was greatly enlarged at the beginning of the 12th century and largely rebuilt in the Gothic style following a fire in 1174, with significant eastward extensions to accommodate the flow of pilgrims visiting the shrine of Thomas Becket, the archbishop who was murdered in the cathedral in 1170. The Norman nave and transepts survived until the late 14th century when they were demolished to make way for the present structures.

Loitering on the adjacent garden I found a sculpture of a horse. The sculpture was so real that at the first glance it seemed like a real one.

Next we went inside the gigantic cathedral. We expected to go inside the cathedral but since it was under renovation, it was completely prohibited to take photographs of the interior.

We stayed there for nearly 45 minutes and then headed for St. Marry’s Church. For the church, we came out of the cathedral and headed west along Burgate. The Roman Museum was on the right side of us but due to the lockdown caused by Covid 19 pandemic, we could not go inside.  The vintage houses of the heritage town still possess the relics of the early medieval  architecture.

We continued our walk along Burgate. crossed Broad Street, and then Monastery Street and reached St. Augustine’s Abbey. The Benedictine Monastery was founded on 598 AD and functioned as a monastery till 16th Century. Though closed due to Covid-19 Pandemic but still the architectural excellence was understood from the outside wall.

Walking along the highway A257 followed by a sharp left turn, we finally arrived at St. Martin’s Church.

St. Martin Church is recognised as having the longest continuous history as a parish church in the English-speaking world. It is often noted as “The first church founded in England”, although Roman and Celtic churches had existed for centuries. This church is, along with Canterbury Cathedral and St Augustine’s Abbey, part of a UNESCO World Heritage Site.

Thankfully the adjacent cemetery was not closed. We went inside and got a closer look of the architecture. The lovely church contains many reused Roman bricks or spolia, as well as complete sections of walls of Roman tiles. At the core of the church the brick remains of a Roman tomb were integrated into the structure.

It was almost 6PM so we decided to start for the station. I wish to visit Canterbury again and hopefully the maintenance work will be over and the world will come out of the fear of pandemic disease.